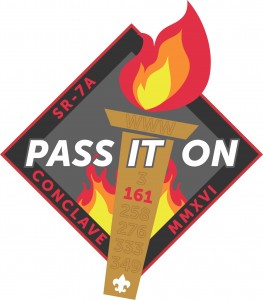 Theme – Pass it On

Weather: Partly cloudy and warm on Friday. Cloudy and mild on Saturday. Heavy rain began after 10:00 p.m. Saturday, but had slowed to scattered showers by Sunday morning.

Notes: For the fourth year, brothers of SR-7A performed cheerful service to the community. This year, 2,747 stuffed animals were donated to Gleaning for the World and will be sent to children in hospitals and orphanages. Also, on Saturday of Conclave, a total of 750 backpacks were filled with school supplies and will be distributed to needy children. The generous spirit of SR-7A Arrowmen continued into Saturday night, when over $1,500 was raised at the Conclave Patch Auction to help fund this and future service projects.

Photos: For photos of Conclave 2016, visit the album on the SR-7A Facebook Page.