Theme – Together We Serve 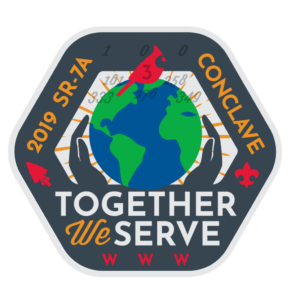 Weather: Cloudy and scattered showers on Friday. Sunny and warm on Saturday. A light drizzle began after 10:00 p.m. Saturday, but had slowed to partly cloudy skies by Sunday morning.

Conclave Service Project: In 2019 the Section partnered with Shood, a Richmond-based non-profit dedicated to providing proper shoes and foot care items to those living in poverty. At Conclave, arrowmen donated over 4,500 pairs of athletic socks and assembled over 2,500 foot-care bags to benefit Richmond’s homeless population. Shood representatives spoke at the Saturday night show, Fire-Fest, and thanked the Section for the incredible help and service. The representatives announced that the 2,500 foot-care bags would begin to be distributed to the Greater Richmond Area as soon as the Tuesday following conclave.

Notes: Afternoon storm on Friday caused a reservation-wide power outage that lasted until 10PM. Friday Night Kick-off was rescheduled to 7PM. Power outage incapacitated both HOVSR Dining Halls which ran on electricity. Friday night dinner was only made possible through the gracious personnel help and supply of propane burners from Blue Heron #349 and Shenshawpotoo #276. Introduced this year as new program enhancements were Adult Activities, Conclave Cruise Director, and Conclave mobile application (available for both iOS and Android).

Adult Amusements was a new program area introduced at the 2019 Conclave. One of the aspects of the program was an inaugural Corn Hole Tournament.