Theme: A Leap Toward Tomorrow 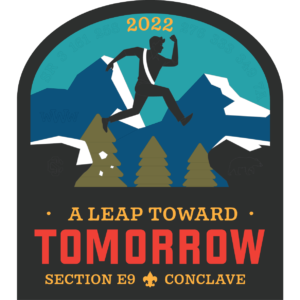 Weather: Cool and clear on Friday. Overcast with light rain midday Saturday that cleared up by Saturday night. Partly cloudy Sunday with scattered showers after most participants left.

Conclave Service Project: In 2022, Section E9 partnered with Loaves and Fishes, a food pantry serving the Greater Charlottesville area to package food care packages and goods for Afghan Refugees in the community. At Conclave, arrowmen donated over 1,100 pounds of food products and spent Saturday morning assembling over 300 care packages. The packages assembled helped feed families and refugees who require a specific diet. The annual silent and live patch auctions as well as registration donations were also hugely successful and collectively raised nearly $3,000 that will be sent to Loaves and Fishes to support their work.

Notes: Due to the postponement of the 2021 SR-7A Conclave from its usual spring weekend to late summer, arrowmen gathered for the 2022 Conclave just seven months after the prior Conclave. Between Conclaves, the Order of the Arrow re-aligned regions resulting in a new name for the Section. Eastern Region Section Nine (E9), which was formerly Southern Region Section Seven A (SR-7A), had no territory changes and remains the six Virginia-based lodges. This was the first Conclave under the Section’s new name: E9.